Neutering is the removal of an animal’s reproductive organ, either all of it or a considerably large part. Neutering is the most common method in animals. In the United States, most humane societies, animal shelters and rescue groups (not to mention numerous commercial entities) urge pet owners to have their pets spayed or neutered to prevent the births of unwanted litters, contributing to the overpopulation of animals.

Advantages
Besides being a birth control method, neutering[males]/spaying[females] has the following health benefits:

Procedure
In female animals, spaying involves abdominal surgery to remove the ovaries and uterus (ovariohysterectomy). Alternatively, it is also possible to remove only the ovaries (ovariectomy), which is mainly done in cats and young female dogs.

The surgery is usually performed through a ventral (belly) midline incision below the umbilicus (belly button). The incision size varies depending upon the surgeon and the size of the animal. The uterine horns are identified and the ovaries are found by following the horns to their ends. 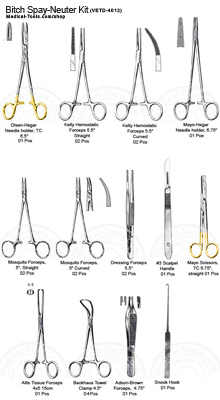